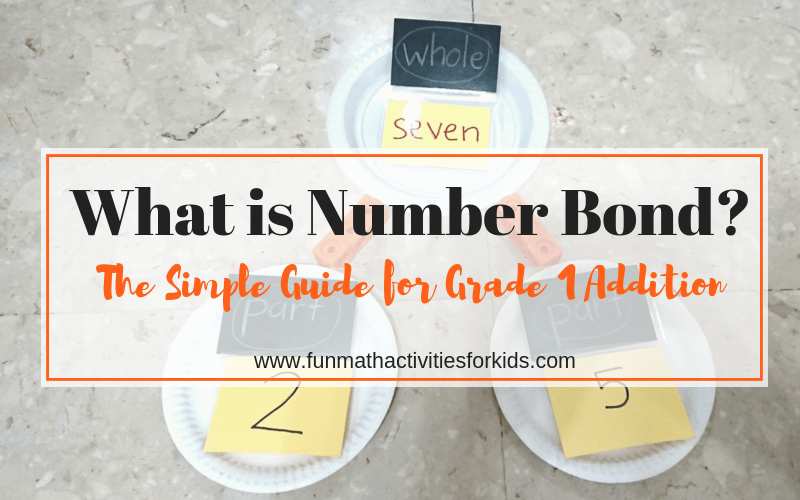 How to teach Number Bond to your 1st Grader

If you have kids in 1st grade (elementary school), you might heard them said they’re doing math number bonds in school. Or sometimes they started learning it in Kindergarten 2.

They might told you about the three circles of number bond, or the long rectangle block thing.

So what is a number bond, in simple words?

What is a Number Bond

Number bond is a pictorial model on how pair of numbers can join together to make a bigger number.

Or, how a number can be broken down into smaller numbers.

Basically number bond teaches a child to split a number (a quantity) into two.

It is a concept used to help students understand better about number sense, which then leads them into addition and subtraction.

The first circle will be called the “WHOLE”, and will have the biggest number among the three. While the other two circles will be the “PART”. 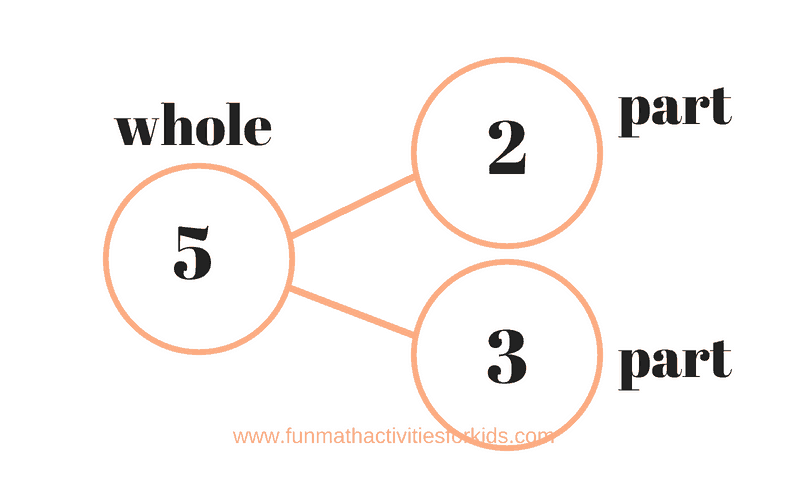 Sometimes, number bond can also be drawn as a long rectangle block, split into two.

The two shorter blocks will be the “PART”, and the whole block will be called, well, “WHOLE”. 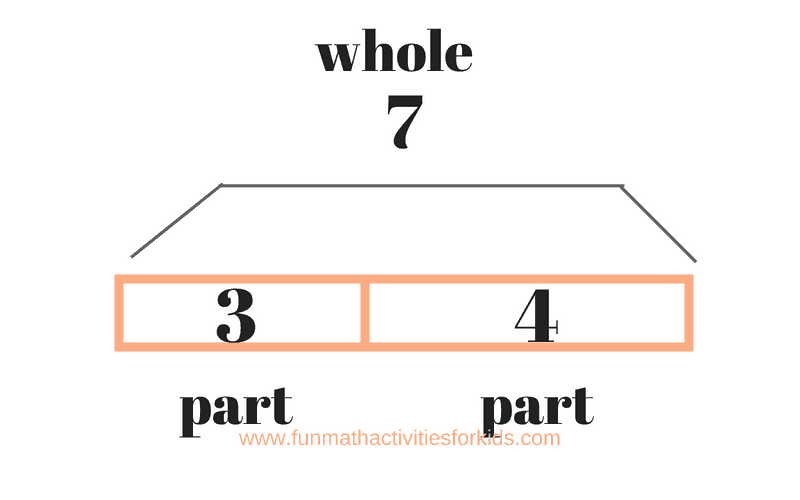 What does that statement lead to? Yep. ADDITION. So, this is number bond.

What is Whole and Part in Number Bond?

The basic concept; a whole is made up from smaller parts. Similarly, parts joined together will be a whole.

So the “whole” in number bond, would be the biggest number among the three numbers involved.

The other two smaller numbers will be the two “part”.

Sometimes they’ll write it as “W” for the whole, and “P” for the parts.

How does a number bond work?

This helps children to understand how they can split a number into smaller “parts”.

When they join, i.e. add-up, all the parts, it becomes the bigger number.

When they break down a number and take away one part, i.e. subtract, it will have the other part left.

In other words, this will lead to their addition & subtraction concepts.

How to teach number bond?

The main idea is, to introduce that some number of objects can be split into two groups.

Let me explain how with an example below.

First, get your child to take 5 objects and line them up on the table. You can use blocks, popsicle sticks, math cubes, math counters, or other small items. 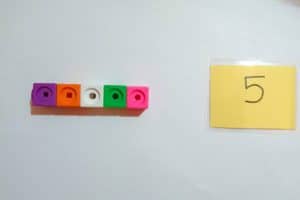 Then ask him/her to split them into two groups. You can guide them by showing the first combination, say, “Let’s move two blocks up. Now can you count how many blocks left at the bottom?” 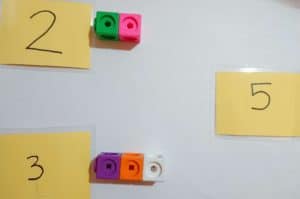 Now, ask them to count all the blocks again, from the top row to the bottom row. And teach them the sentence while pointing to each group of blocks, “Two and three make five.”

How to find different pairs of number bond

Now, put all the five blocks on a row again. Then ask your child to split the blocks into different combinations.

Is there a different way to break down these five blocks? 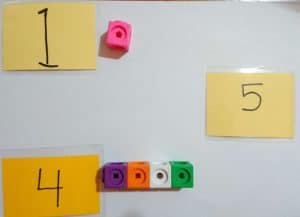 Then practice to say the number bond statement again, “One and four make… FIVE!”

Now choose a different number. Ask them to find a few ways to split that number into smaller groups of blocks.

Once they’re comfortable in breaking down a number, subsequently they can learn the pictorial representation of number bond; the three connecting circles, with two “part” and one “whole“.

Let me bring the picture again. 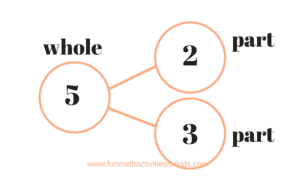 Rule of thumb; the biggest number will be the WHOLE, while the other two smaller numbers are the PART.

Practice: ask them to draw the number bond based on the different combinations of making-five as above.

What can you use to visualize a number bond?

You can use anything small and countable, preferably in similar sizes.

Here are some ideas:

1. I love to use our mathlink cubes (the ones you see from the previous images) to represent the number bond. This will simulate the blocks model of number bond.

And with the actual action of assembling the blocks, it can represent better the idea of breaking down a number and joining numbers.

2. We also used three disposable plates (to represent the “whole” and two “parts”) and small objects. Here my  daughter used her colorful counters. 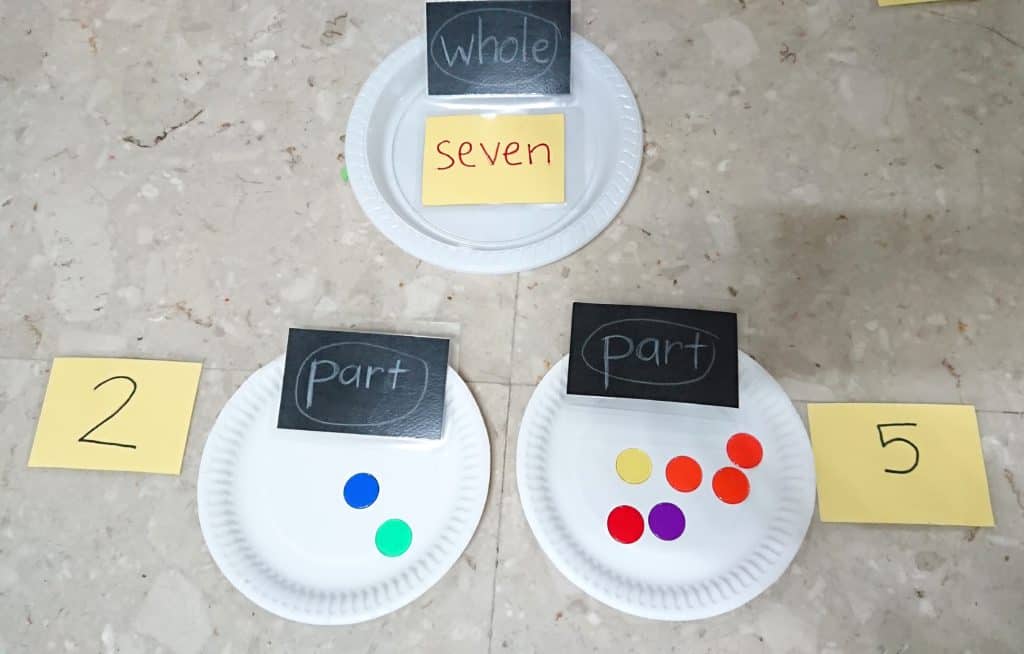 3. You can also use popsicle sticks to represent the number, by lining them up vertically side by side.

This is also useful when your kids are taught to draw figure sticks at school to do their counting. Popsicle sticks is the closest real object to resemble the figure sticks.

How to write number bond equation

By practicing with the blocks or counters on how we can break down a number, these are the two points we want to emphasize to our kids:

1. Two numbers – the PARTs- can be joined together, to make a bigger number – the WHOLE.

2. A (bigger) number can be broken down into two smaller numbers – the PARTs.

With this concept in mind, we’ll learn how to write the addition equation based on the number bond.

The rule of thumb:

So, remember we already have some number bonds sentences previously?

What is the WHOLE?

The biggest number from the sentence: 5.

What are the PARTs?

The two other smaller numbers: 2 and 3.

Ok slowly now… So the number bond equation would be:

Now, go make the addition equations for the other number bonds!

Danielle from Danielle the Tutor has a well explained video on this too. She used a simple cards with colored dots on them to show the parts of a number bond. 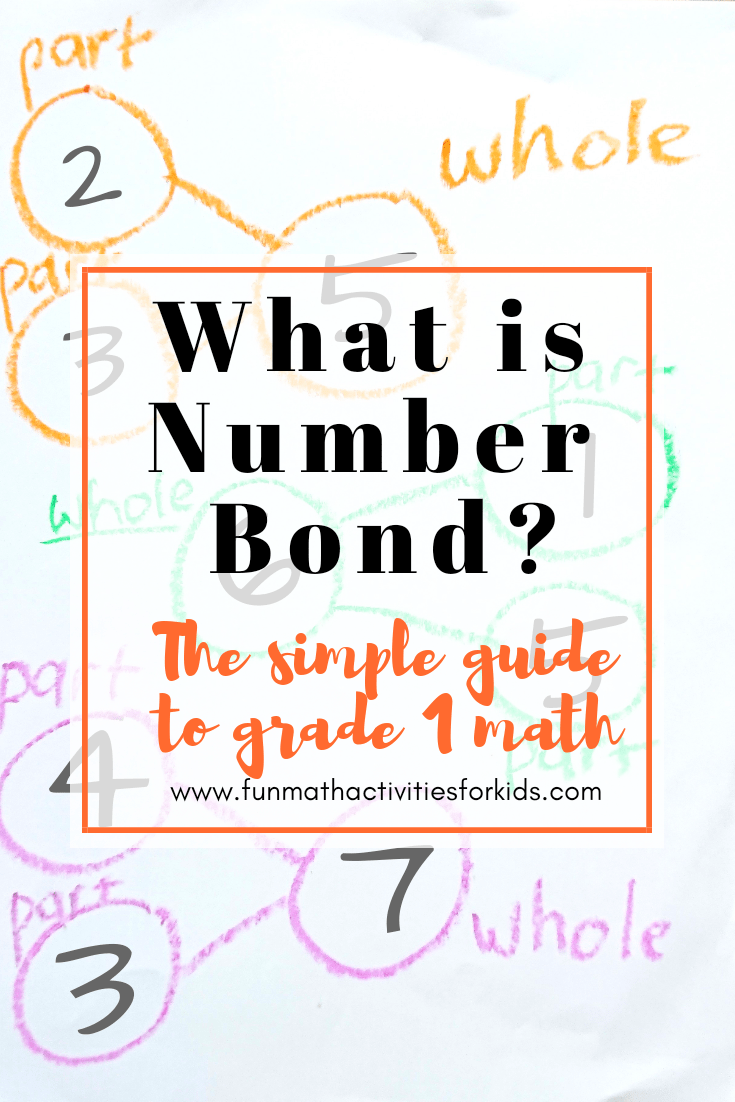 What do you think? Is this number bond still a pain to explain (wow it rhymes!)?

I would love to hear from you! Comment below!

(Psstt! Don’t forget to share this on Pinterest. You’d never know if other fellow parents would need to read this too!) Why do We Need Math in Life? Do you know, kids usually struggling with math when they didn't have … END_OF_DOCUMENT_TOKEN_TO_BE_REPLACED 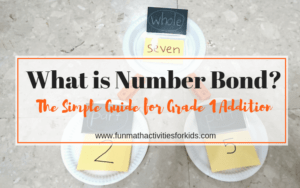 How to teach Number Bond to your 1st Grader If you have kids in 1st grade (elementary school), you … END_OF_DOCUMENT_TOKEN_TO_BE_REPLACED 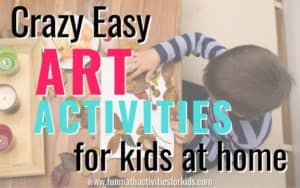 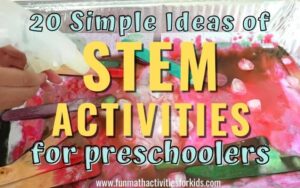 Easy Ideas for STEM Activities for Preschool STEM activities are great for kids of all ages! It … END_OF_DOCUMENT_TOKEN_TO_BE_REPLACED 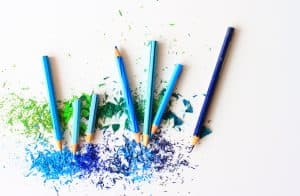